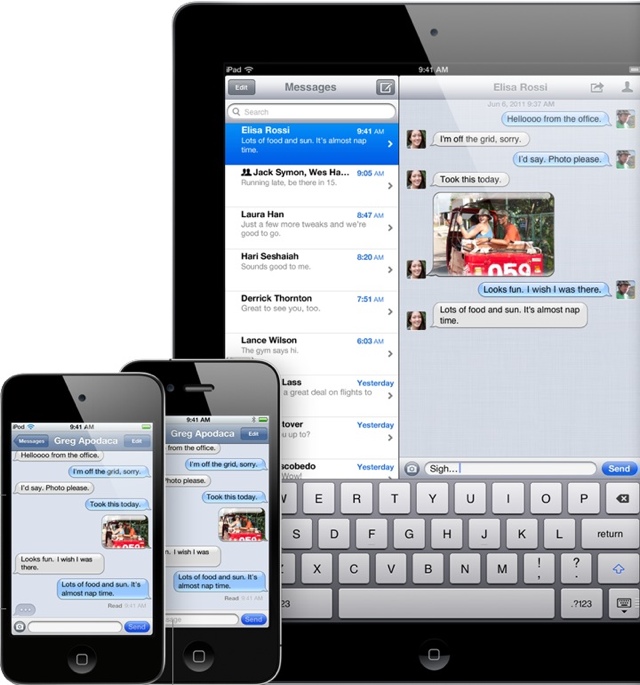 The day was June 6th, Steve had taken the stage, he had announced nine major features of iOS, blah, blah, blah. You’ve heard about that. You may have also heard about iMessage, Apple’s BBM killer. From a competitive standpoint it makes a lot of sense because BBM seems to be the one thing only most BlackBerry owners to their phones. iMessage also makes sense because it is so simple for customers to use. No matter how tech illiterate someone is they will use this because no one has to do anything different. It also benefits the user because they don’t have to pay for messages sent over iMessage. Also users get read receipts and they can know when the person they are messaging is typing and lastly iMessage will also be available on iPod Touch and iPad. This is all great, but the best thing about iMessage from my perspective, is the story behind it. Sit down and listen to the tale.
Once upon a time some guy sitting in a cubicle thought up text messaging. However, as customers got ahold of this system or communication there was a problem, you could only text people on the same carrier as you. That sucked, that was fixed. However now we have the smartphone, we have instant messaging. Somehow the thick-headed carriers that we begrudgingly pay money to every single month have not seen potential here and you continue to be charged outrageous prices for the ever so small bit of data that you send to a phone that you call a text. While carriers were sitting in their expensive suits and charging crazy prices for texting, Apple was making iMessage. So now it is June 6th and Apple released iMessage that lets people communicate on any iDevice for free. But that isn’t the best part. Apple didn’t even tell the carriers they were about to kill their text messaging model. Now one can argue that Apple is making the carriers angry and rattle off a long post about how this is really a bad move for the customers but it isn’t. If you want to see how this is good for their users just scroll back to the top of this post, you obviously did not read it. The carriers will have to suck it up, they need people paying for data plans, therefore they can’t anger users too much. Meanwhile this Apple’s move boots customer loyalty and puts more control in the hands or users. So Apple’s customers’ loyalty is increased, the carriers lose loyalty and control of their customers.